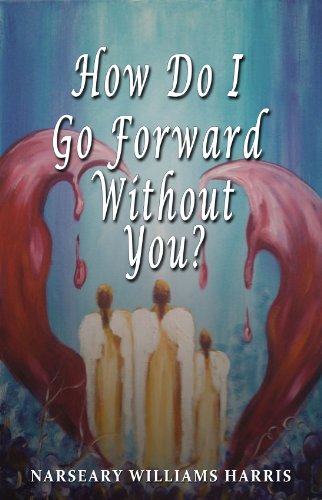 How Do I Go Forward Without You? Narseary Williams Harris

US Evangelist Narseary Williams Harris and her husband, Reverend Harris never knew their genotype and its implications until it was too late …

Their experience is memorialised in the book, HOW DO I GO FORWARD WITHOUT YOU?

Narseary Harris, as a child, had seen God at work healing her mother of a long-standing illness; and her mother in turn laying hands on the sick and healing them. An unforgettable case in point was that of a blind woman whom Sister Ruth (Narseary’s mother) restored to sight.

By the age of 12, Narseary, having received the Holy Spirit, had turned a healer herself. God was working in and through her. She knew and trusted the One with whom All was possible.

Narseary graduated from High School on a Friday and got married the next day. She was 17, her husband a fiery young preacher. Everything had come full circle for the young bride. She would live religiously ever after, preaching the gospel, evangelizing and proselytizing.

Unknown to either husband or wife, each carried the sickle cell trait. Narseary’s first pregnancy resulted in a miscarriage at six months. A couple of months later, she was pregnant again. Two months in, she had another miscarriage. Where was the God, she began to think. What was happening to me!

After a sad and frustrating five year wait for the fruit of the womb, Paul King Harris was born (1974). The prayerful, spirit-filled family was devastated when the baby was diagnosed with sickle cell anaemia. Reverend Vernon Harris at first refused to accept that he was with sickle cell trait – his parents categorically stated there was no such a phenomenon in the family line. Narseary heard of an aunt who died very young from sickle cell anaemia.

What’s going to happen to the baby she waited five years to have, she asked her doctor.

‘They die!’ the doctor replied, ‘Your son would be lucky to see his fifth birthday.’

Where was the One she had faithfully served all her life?

From the day of Paul’s diagnosis, for the pious family, things would never be the same again.

Now aware that SCD came about by inheritance from both parents having Sickle Cell Trait, Narseary dreaded having another child with sickle cell anaemia. So she inquired from her doctor.

‘It’s one out of four pregnancies,’ he said, ‘You already have that one.’

With such reassurance from an authority, Narseary went ahead and got pregnant again. King Solomon was born when his elder brother was two. At six months, he presented with dark urine and swollen limbs. The diagnosis was touch and go.

It would be an understatement to say that the harried mother was disappointed, angry and benumbed with raw fear. She was angry with herself, livid with the doctor who deceived her – and incensed against God. Why did He permit her to have another child with SS!

Many times Paul and Solomon were in excruciating pain and hospitalized together. It was a trillion Hells for a praying mother, a heart-wrenching spectacle to watch innocents from her loins grilled so unrelentingly by sickle cell crises of every sort. The family would pray and fast and fast and pray but there was little respite for the children. Were it possible for Narseary to take on the children’s pains, she would have done it a trillion times over – and gladly too.

With two children having sickle cell anaemia in a row, and with the dreadful realization that there was a 25% chance of having more children with the condition, Mrs. Harris determined NEVER to get pregnant again.

After every birth control measure was found unsuitable, the hapless mother was advised to have her tubes tied, to which she readily agreed. But, while awaiting her appointment, the unthinkable happened AGAIN!

Shocked, anguished and terrified, for the first time in her life, the devout Christian mother contemplated an abortion. Three children with sickle cell was more than she can cope with!

It was a very difficult pregnancy. Elijah was born by C-Section, unlike his brothers before him.

Fortunately, as many would say (even close and distant relatives of the Harris’ said so), Elijah was without sickle cell anaemia. He only harboured the trait.

Though it was a huge relief, it was like a drop out of the family’s ocean of trouble. Even the youngest child of the family would not be spared the psychological sequelae of having siblings with SCD.

At the age of 5, Paul had a catastrophic stroke. Lying still and unresponsive on hospital bed, the nurses waited for the doctor to pronounce time of death.

All of a sudden, he coughed and jerked back to life!

‘Paul died at the age of five as the doctors predicted,’ said his mom, ‘but God brought him back to life.’

Before he left the hospital after the stroke, he visited every sick child and interceded for them. It was later said that the children he laid hands on recovered faster.

At the age of 6, though wobbly after the stroke, the little guy joined his school’s musical band. Without formal instruction, it was discovered that he could every musical instrument. He was also a gifted artist.

At 9, Paul began to give away his toys and personal belongings. He told his mother he did not want to live anymore. He later told a psychologist he wanted his mother to be free of the anguish he out her through since he was born.

At the age of 14, he had an operation to remove his gall bladder. At 21, he was diagnosed with diabetes.

King Solomon was determined not to let sickle cell get in his way. He was adventurous and he tested and stretched the limits imposed by his condition. He would insist on a swim and almost invariably landed in the Emergency Room. He played football – even attempted to join the US Marines!

Solomon was born to dance, draw and write – at the age of two, he danced anywhere and everywhere he heard music playing. Later on, he discovered within himself the talent of writing, penning harsh and brutal poems about his pain and suffering. Of course he set his poems to music.

Once, in a despondent mood, Paul said to his mother:

‘I fast and pray. I’ve given my life to the Lord. I have held on to my faith that I would be healed. What have I done wrong? Why won’t God heal me?!’

One month later, after an angiogram, King Paul David Harris passed away. He was 26. On his death-bed, Paul prayed, ministered and prophesied to everyone who went to visit him.

Like Paul’s, Solomon’s crises and complications grew worse as he grew older. Like Paul he was filled with fury about SCD but he never elected to curse God and drop dead. He maintained his faith to the last.

Solomon was taken to a hospice, where he would often hallucinate about his elder brother. With two loving children left behind to record the future for him, he passed away 8 February 2010. He was 33.

As a little boy, Elijah helplessly watched his brothers roll in pain at home and hospital. Whenever any of his brothers was in hospital, the boy would take his own pillow and blanket and sleep on the floor next to the absent brother’s bed.

He felt bad that he was not sickly too. He was sorry he could do things – play basketball, football, swim and run long distances – that his brothers could not do.

Plans Far Greater Than We Understand

When Narseary lost her dad, she was able to compare that with the loss of Paul and Solomon.

‘Losing a parent,’ she says, ‘is very different from losing one’s children.’

Friends and relatives often asked her, ‘How can you trust in God when He allowed your children to suffer?’

With a wan smile, the author would answer, ‘He has a plan far greater than we humans can comprehend …’

Narseary knows too well that her boys will always continue to bide there in her heart, there in the hearts of all those who knew them and there in the ravishing insatiable wombs of Time and Mother Earth.