He Has Performed for Two US Presidents … At 19, He Has Accomplished More Than Most Teenagers

At 19 an accomplished singer and sickle cell disease advocate, AJ Green has accomplished more than most teens his age and doesn’t let his condition keep him from reaching his goals. In addition to performing for two U.S. presidents, Clinton and Obama, Green has shared the stage with Elton John, the Canadian Tenors, Jason Mraz, Rob Thomas and others

‘When AJ was born in 1992, there was a real lack of information and education about newborn screening and sickle cell disease. The doctor told us that the newborn screening showed that AJ has sickle cell disease. I have the sickle cell trait and my husband has the trait. I didn’t really know anything about, or anybody with, the actual disease. But when the doctor said the word ‘disease’ I started crying because I knew that couldn’t be good. At that time, of course, I was devastated. I went to the computer and looked it up and saw what could happen to him and what was down the line for him.

‘AJ had his first sickle cell crisis at about 8 months. We didn’t really know what to expect with a crisis, but the early newborn screening test was helpful because we knew he had sickle cell disease. When he had his first painful sickle cell crisis we would never have known to take him to the hospital. We probably would have just thought he was crying to be crying and put a bottle in his mouth. We knew something had to be wrong with him and we didn’t take it lightly. We took him to the hospital and they said that he was having a crisis in the top of his foot. It was important to have the newborn screening done so that we knew to watch for these things. If we hadn’t had the newborn screening done we wouldn’t have known what was going on with him and sought appropriate care right away.

‘It’s important for parents to get newborn screening to know if there’s anything wrong with the child. If it’s sickle cell, it just makes you aware of what’s going on with the child, things to look for (if they’re dehydrated, not getting enough water, if they’re crying a lot from pain) because you don’t know that they’re hurting, they can’t tell you.’ – Pam Green, AJ’ mom. 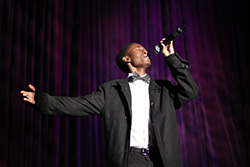 AJ, at 19 years old, an accomplished singer and sickle cell disease advocate, AJ has accomplished more than most teens his age and doesn’t let his condition keep him from reaching his goals. In addition to performing for two U.S. presidents, Clinton and Obama, the Grammy-hopeful has shared the stage with Elton John, the Canadian Tenors, Jason Mraz, Rob Thomas, and sang a duet with Jennifer Hudson. He continues to be a strong advocate for the community in his efforts to ‘put sickle cell on the map’ by raising awareness of the condition so that someday it will receive as much attention as other high profile disease states such as cancer. He recently spoke with the kids at the Sickle Cell Disease Association of Mobile, Alabama and joined up with Remington College’s ‘3 Lives’ blood drive campaign which raises awareness for minority blood donors and encourages people to donate blood.

‘For the most part I have been able to meet all my goals, but I always strive for bigger goals in life so everything’s not complete just yet. My first aspiration was to be known as a singer and also as an advocate for sickle cell disease. I try to be that inspiration, you know. It’s not as bad as people try to make it seem. I mean, it is, but it’s not. People don’t have to be afraid of it; they don’t have to be held down by it. Try to find triumph in the situation.’ – AJ Green

EXCERPT FROM INTERVIEW WITH ABILITY MAGAZINE

At first, I looked at sickle cell as holding me back, but as I started singing more I realized that everything I sing tells a story of pain, I guess you might say.

I think recording my album showed how sickle cell can be such a hurdle in my life, but it also showed my strength. The night before I was about to go into the studio to record, I think, four songs off of the album, I got really sick. I had a lot of pain in my legs. It got so bad that I started crying. I felt like a construction worker was just hammering at my body.…