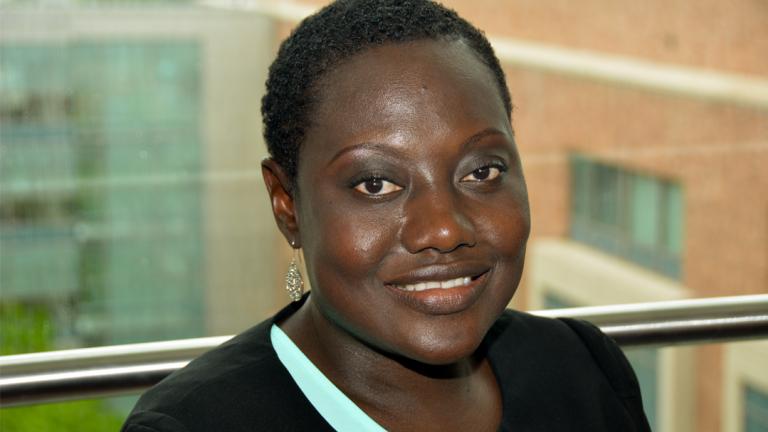 Jennifer Nsenkyire (pronounced ‘century’) has suffered from sickle cell disease for as long as she can remember.  As a teenager growing up in her native Ghana, she endured the excruciating pain caused by the condition sometimes for days at a time.  At least once a month she had to be hospitalized, and blood transfusions came at a steady, troubling pace.

In search of a better life, Jennifer’s family moved to the United States in 1995, and Jennifer enrolled at George Mason University in Fairfax, Va., eventually earning a bachelor’s degree in finance. But her struggle with the disease continued.

While normal red blood cells are disc-shaped, sickle cell disease is marked by the formation of abnormal crescent-shaped cells that reduce blood and oxygen flow. The disease is known to take a hefty toll: it can cause fatigue, severe pain, organ damage, stroke, even death.  It affects millions worldwide.  In the United States, about 90,000 to 100,000 people, mostly of African ancestry, have the condition.  The disease also affects people from Hispanic, southern European, Middle Eastern, and other backgrounds.

Thanks to advances in treatment, though, the life expectancy for Americans with sickle cell disease has dramatically increased over the last decades—from about 14 years in the 1970s to 40 to 50 years, and longer, today. Still, a widely-available cure remains elusive.

In 2001, one of Jennifer’s aunts told her about a clinic at the National Institutes of Health (NIH) in Bethesda, Md., that specialized in treating patients with sickle cell disease.  Jennifer eventually came for a visit, and by 2005, had enrolled in a clinical trial and began receiving treatments with hydroxyurea, an FDA-approved drug that has been shown to boost survival rates and reduce pain crises in some adults with sickle cell disease.  At first the drug helped reduce the number of pain attacks, but after a few years it seemed to have little effect, and Jennifer’s condition became progressively worse.

Then came hope: in 2009 doctors at NIH asked Jennifer to consider a type of experimental bone marrow transplant called a hematopoietic stem cell transplant. Stem cells, which are found in bone marrow, are a type of unspecialized cell that, under certain conditions, can change into a more specialized cell, such as a healthy red blood cell.

“I was ecstatic when I heard about the opportunity,” said Jennifer.  “The NIH doctors explained the risks and expectations and stated that there were no guarantees. But with my suffering, I was willing to try anything.”

To date, about 68 patients with sickle cell disease have undergone bone marrow transplants at NIH—worldwide, about 1,200. But the procedure is still experimental, and only about 10 percent of patients are even considered good candidates.  The ones best suited: those who are able to find a stem cell donor—usually a close relative such as a sister or brother—who is a close immunological “match.” That is, they have the same HLA antigens, or proteins, in their stem cells as the person with sickle cell disease. With such a donor, the patient can then have what is called a matched-sibling stem cell transplant.

But the odds of finding a closely-matched donor without sickle cell disease is about 1 in 7, so the number of people who get matched-sibling transplants remains low. Recently researchers have begun experimenting with “haplo-transplantation,” or a half-match from a sibling, parent, or child. In a half-match, only about half of the donor HLA antigens match those of the recipient.  Normally the mismatches would be attacked by the immune system as foreign bodies, but recent improvements in immunosuppressant medicines have allowed half-matched transplants to become much more effective.

A half-match transplant is the kind Jennifer decided on when it became clear that her mother could be her donor. But before she took the leap, she carefully considered the risks that come with any transplant: severe infections, seizures, and graft-versus-host disease, a dangerous condition in which immune cells from the donor attack the recipient’s organs. Jennifer also considered the success rates, which vary depending on the age of the patient and type of transplant. About 95 percent of transplants for children with a matched sibling are effective.  At the NIH, 85-90 percent of matched-sibling transplants in adults have good outcomes. But for haplo-transplants, the kind Jennifer was getting, the success rate at the time was not known.  Jennifer knew she was embarking on a journey that was decidedly uncertain. She went ahead with the procedure anyway.